To listen to a sample of or to buy the wonderful audiobook of My Own Lightning, read by Emily Rankin, click here. 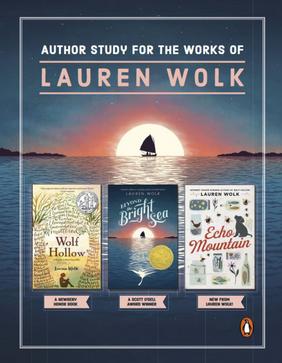 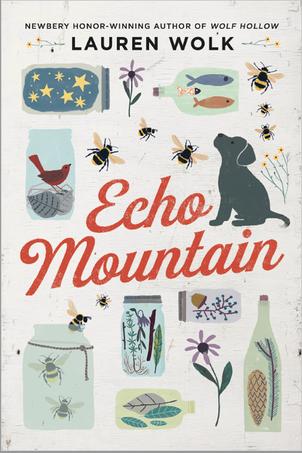 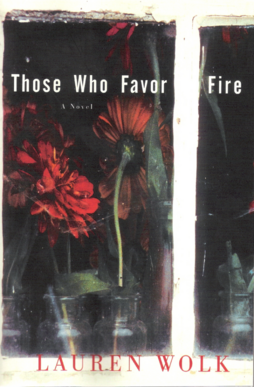 Wolk is the author of the adult novel Those Who Favor Fire (Random House, 1999). For reviews, please visit the Etc. page.

From The Wall Street Journal

Every child learns at school about the dislocation of families during the Great Depression. Novelist Lauren Wolk brings readers into one such stricken household in Echo Mountain, a lyrical and affecting story.... Amid our own dislocations with the coronavirus, this is a book that will soothe readers like a healing balm.

Wolk — author of the Newbery Honor-winning novel “Wolf Hollow” — evokes the mountain environment in language so lovely that long passages read like a novel in verse. … Although this is Depression-era historical fiction, the setting could as easily be today, or tomorrow, or any time a disaster forces a return to the land. Ellie is a strong female protagonist, but she’s not sassy or outspoken, or determined to make her own voice heard. She’s a doer, not a talker. … There’s something refreshing about the quiet strength with which she takes on life-or-death challenges and learns on the fly. Some readers may be put off by the book’s meandering pace or its unflinching depiction of a world where hunting is a necessity. But Ellie is a deeply appealing character, and her story feels right for this moment. A reader who longs to get outdoors will appreciate Ellie’s adventures on Echo Mountain. A reader who wants to make a difference will appreciate the way she rolls up her sleeves and gets things done. And surely there has never been a better time to read about healing, of both the body and the heart.

Twelve-year-old Crow has lived her entire life on a tiny, isolated piece of the starkly beautiful Elizabeth Islands in Massachusetts. Abandoned and set adrift on a small boat when she was just hours old, Crow’s only companions are Osh, the man who rescued and raised her, and Miss Maggie, their fierce and affectionate neighbor across the sandbar.

Crow has always been curious about the world around her, but it isn’t until the night a mysterious fire appears across the water that the unspoken question of her own history forms in her heart. Soon, an unstoppable chain of events is triggered, leading Crow down a path of discovery and danger.

Vivid and heart wrenching, Lauren Wolk’s Beyond the Bright Sea is a gorgeously crafted and tensely paced tale that explores questions of identity, belonging, and the true meaning of family.

Twelve-year-old Ellie feels at home in the Maine woods of Lauren Wolk’s Echo Mountain. Her parents lost their home in the Great Depression and were forced to move, along with many neighbors, to the woods, where Ellie learned to hunt, fish and start a fire. Now, Ellie’s skills and confidence put her at odds with her resentful mother and older sister, who miss their former life in town.

Wolk vividly invokes the shock of losing an old way of life—of trading sidewalks for pine-needle paths, of swapping paper currency for barter with haircuts, eggs and firewood. She also sensitively conveys the swirl of emotions surrounding the accident that has put Ellie’s dad in a coma for months and left his family in a state of suspended grief. Ellie’s mother and sister blame Ellie for the accident, and Ellie’s mother copes by discouraging her daughter’s adaptability and curiosity, worrying that she’s becoming too wild.

Despite these hardships, Ellie remains determined to use her skills to keep her family safe and fed and to find a way to wake up her father. Her dubious yet logical efforts on this front are humorous and heartbreaking—and, just maybe, hopeful. Ellie’s life contains some big mysteries, as well. Who is leaving her beautifully carved miniature figurines? Might the “hag” who lives up the mountain know how to heal her father?

Fans of Wolk’s previous novels, including the Newbery Honor book Wolf Hollow, will once again relish the author’s evocative and touching language (Ellie cuts her hair “because the trees kept trying to comb it”) and her gift for revisiting history through the lens of fulsome and fascinating characters. In this complex, memorable novel, Wolk explores themes of social responsibility, modern versus traditional medicine, biological versus chosen family and more.

Through it all, the book pays heartfelt tribute to resilience and resourcefulness. As seen through the indefatigable Ellie’s wise young eyes, no detail, emotion, creature or scrap of fabric on Echo Mountain is too small to be without value.

Growing up in the shadows cast by two world wars, Annabelle has lived a mostly quiet, steady life in her small Pennsylvania town. Until the day new student Betty Glengarry walks into her class. Betty quickly reveals herself to be cruel and manipulative, and while her bullying seems isolated at first, things quickly escalate, and reclusive World War I veteran Toby becomes a target of her attacks. While others have always seen Toby’s strangeness, Annabelle knows only kindness. She will soon need to find the courage to stand as a lone voice of justice as tensions mount.

Brilliantly crafted, Wolf Hollow is a haunting tale of America at a crossroads and a time when one girl’s resilience, strength, and compassion help to illuminate the darkest corners of our history.

It is a magical thing to step into a world created by Wolk (Beyond the Bright Sea, 2017), even without any fantastic enchantment. In this instance, the story of Ellie and her family is a diamond glinting in the rough of the Great Depression, when poverty drives them from town to a more wild existence on a mountainside. Though her mother and older sister yearn to return to civilized life,
Ellie thrives in this new environment. But they all must muster different brands of courage when an accident leaves Ellie’s father in a coma. Though only 12, Ellie steps up to do many of the tasks, such as hunting and fishing, that had been her father’s, all the while remaining determined to jar him back awake by any means possible. Her spirit and empathy eventually lead her far up the mountain to the cabin of Cate, aka the local hag, where Ellie discovers that Cate is herself ill with a festering wound. Compelled to help Cate as much as her father, Ellie learns and accomplishes more than she knew was possible. Complex and fiercely loving, Ellie is a girl any reader would be proud to have as a friend. Woven with music, puppies, and healing, Wolk’s
beautiful storytelling turns this historical tale of family and survival into a captivating saga.

★ “A powerful story to electrify the soul.” –Booklist, starred review

Bestselling author Lauren Wolk returns to the world of Wolf Hollow in this sequel to her beloved, Newbery Honor–winning debut.

In the aftermath of the tragic events set in motion by bully Betty Glengarry, the routine of daily life in Wolf Hollow has returned. But for Annabelle McBride, loss continues to cast a long shadow and it’s hard to make peace with what feels like threadbare justice. A powerful storm is about to leave change in its wake, setting Annabelle on a new path. A search for her brother’s dog, Buster, will bring them to unfamiliar doorsteps and also reunite Annabelle with a too familiar adversary—Andy Woodberry, who was complicit in Betty’s most terrible acts. But growing up and blazing her own trail will soon force Annabelle to reexamine deeply felt truths—about people, about justice—that had once seemed so uncomplicated. 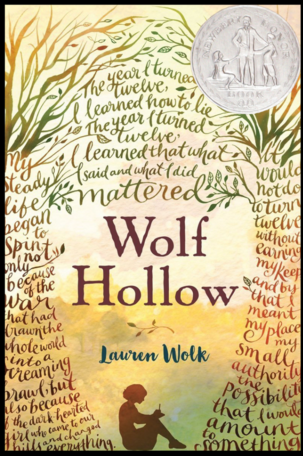 ​After the financial crash, Ellie and her family have lost nearly everything—including their home in town. Forced to start over, Ellie has found a welcome freedom, and a love of the natural world, in her new life on Echo Mountain. But there is little joy, even for Ellie, as her family struggles with the aftermath of an accident that left her father in a coma. An accident for which Ellie has accepted the unearned weight of blame.

Determined to help her father, Ellie will make her way to the top of the mountain in search of the healing secrets of a woman known only as “the hag.” But the hag, and the mountain, still have many untold stories left to reveal and, with them, a fresh chance at happiness.

Critically acclaimed author Lauren Wolk weaves a stunning tale of resilience, persistence, and friendship across three generations of strong women, set against the rough and ragged beauty of the mountain they all call home..

A girl realizes her standout gifts as a healer in this exquisitely layered historical novel set in Depression-era Maine. After the financial crash forces a tight-knit family of five to move from town to build a cabin on Echo Mountain, a tree-felling accident puts 12-year-old narrator Ellie’s father into a coma. The family’s struggle to survive intensifies, made worse by fears about whether their beloved father—a tailor turned woodsman who, like Ellie, loves the wild—will ever awaken. Complex family dynamics loom large amid day-to-day matters: Ellie’s mother and sister long for their former life and blame Ellie for her father’s state; Ellie, who discovers a gift for healing, further upsets them by trying to startle her father awake. When a dog leads Ellie to “the hag,” a woman who knows about cures and is herself suffering, the girl lends a hand, resulting in further tensions, this time within the interconnected mountain community. Via strongly sketched cabin-life cadences and memorable, empathic characterizations—including, perhaps most vividly, of the wilderness itself—Newbery Honoree Wolk (Wolf Hollow) builds a powerful, well-paced portrait of interconnectedness, work and learning, and strength in a time of crisis.

After losing almost everything in the Great Depression, Ellie’s family moves to the Maine woods on Echo Mountain to start a farm—then tragedy strikes.

Not long after getting them established in their new life, Ellie’s father is struck on the head by a falling tree and lapses into a monthslong coma, his recovery unlikely. Never feeling threatened by the wilderness the way her mother and older sister, Esther, do, Ellie takes over many of her beloved father’s chores, finding comfort and confidence in the forest. She’s fully mindful of her place in the natural world and her impact on the plants and animals she shares it with. After she becomes determined to use the resources of the woods, however novel and imaginative the application, to save her father, conflict with her mother and Esther increases sharply. Led by a dog, Ellie discovers elderly Cate—called “hag” and shunned as a witch—badly injured, living alone in a cabin on the mountaintop. Cate fully understands the 12-year-old’s slightly supernatural sense. Cate’s grandson, Larkin, Ellie’s age, flits in and out of the tale before finally claiming his place in this magnificently related story of the wide arc of responsibility, acceptance, and, ultimately, connectedness. Carefully paced and told in lyrical prose, characters—all default white—are given plenty of time and room to develop against a well-realized, timeless setting. A luscious, shivery delight.

To access an Educator's Guide for Wolf Hollow, Beyond the Bright Sea, and Echo Mountain, click here.