Wolk's article about FRAGILE, an exhibition of art by Richard Neal and Frank Anigbo, for which she is curator (below), appears in the 2022 issue of Provincetown Art. To obtain a copy of the issue, click here. 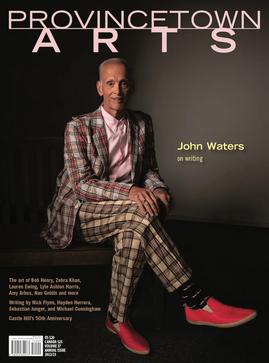 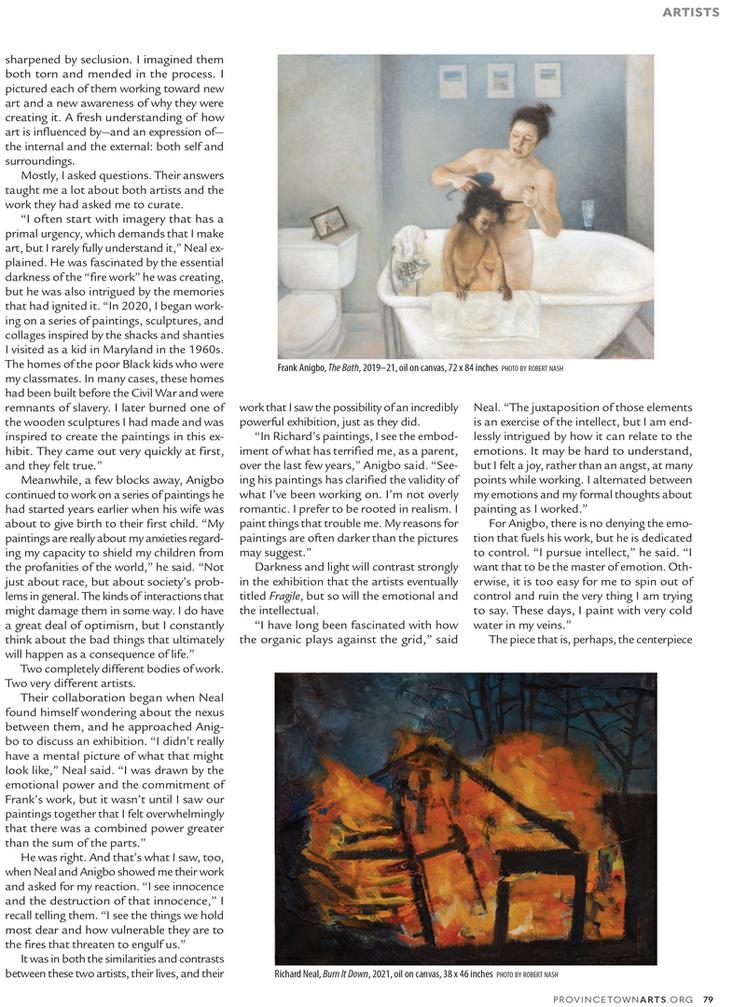 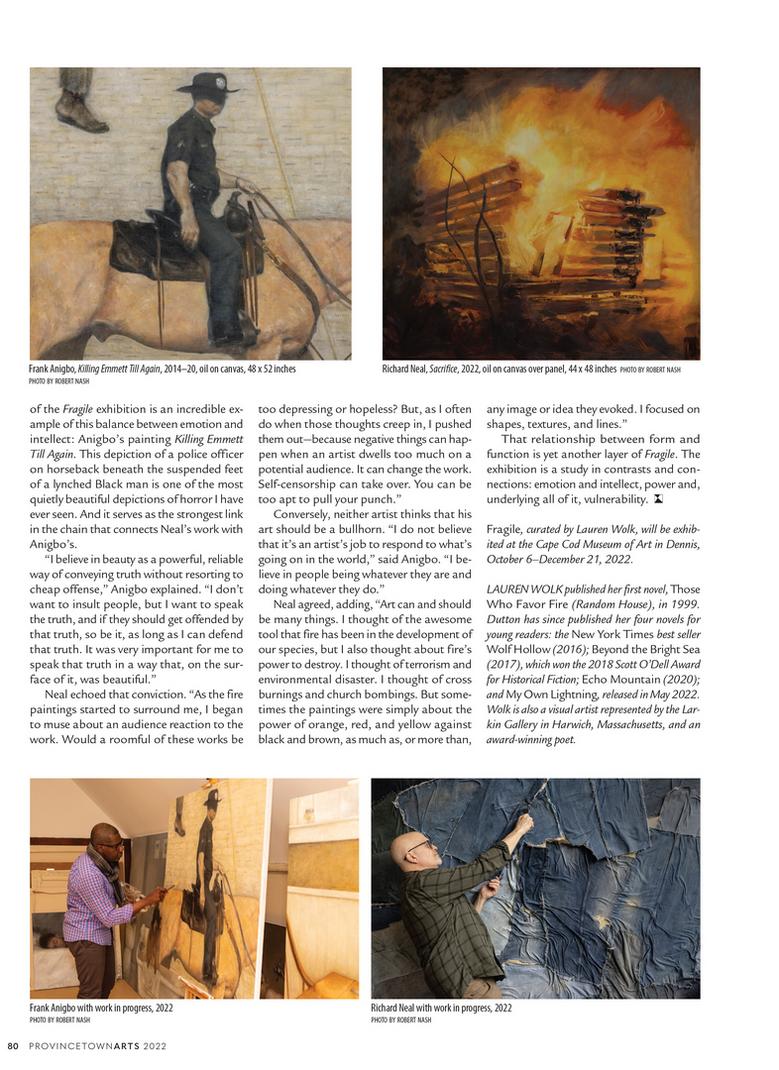 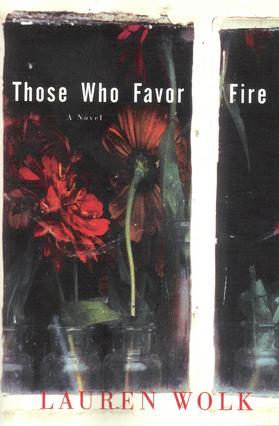 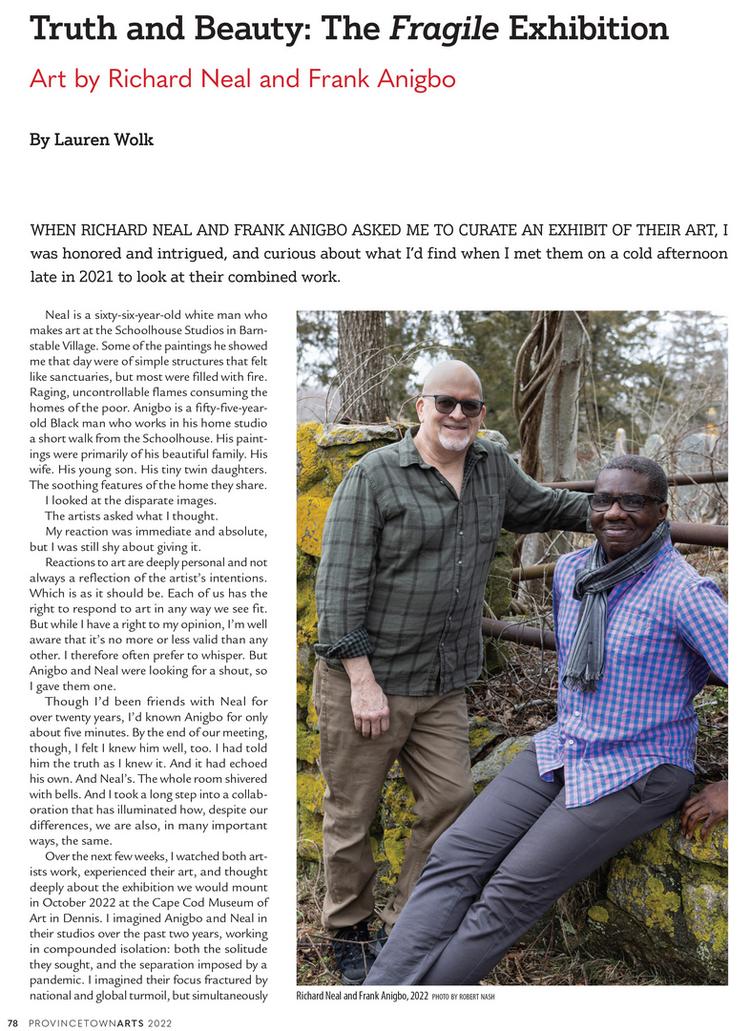 "Those Who Favor Fire, Lauren Wolk's first novel, is a beautifully developed metaphor for the end of the century, the end of the world, and the end of life as we know it. ... Wolk describes a dying world, and she does so with an elegiac courtesy and a poetic respect for her characters' hidden longings. It is a very promising debut....Those Who Favor Fire offers the promise of many more novels to come. The beauty of the language, the imaginative flair that Wolk brings to the novel's world, and the glimpses she reveals of the innermost heart of her characters, like the tiny plumes of smoke that reveal the fire--all signal deep reserves and a large and, dare I say, consuming talent." –The New Orleans Times-Picayune

“Wolk provides an unforgettable look at love—not only the kind between two people, but also the kind between community members and their town…. Wolk’s ability to spin fresh, original phrases will lure you into Belle Haven, and her motley crew of characters will keep you there. As the townsfolk face new challenges, heartbreaks and dangers, the author shows that the more the fire flourishes beneath Belle Haven, the more love flourishes up above. Likewise, this book is almost guaranteed to find a warm spot in the hearts of its readers.” –USA Today

“In artful hands, the most unlikely fictional places will spring to life. And not only spring, but stay so true that afterward one’s own world feels unnatural, like walking in shoes after a day on the ice. Belle Haven, the setting for Lauren Wolk’s remarkable first novel, Those Who Favor Fire, is such a place. ... [It] reveals itself is in some ways to be the archetypal American Pioneer story. The people of Belle Haven, like their earliest forbears, are survivors destined to reinvent themselves in a new place. Or, to recall an even earlier mythology--they literally rise up from the ashes. Those Who Favor Fire shepherds us along with them, toward the very brink where, alongside Joe and Rachel, we peer into the gaping maw, then turn back, changed.” –The Boston Globe

“Newcomer Lauren Wolk … has a precise eye for place and character, a keen ear for narrative and a Barbara Kingsolver-like instinct for situating a love story within a matrix of external, worldly and socio-political concerns…. : Those Who Favor Fire moves freely between weight and lightheartedness, so that even its more charged, significant moments exhibit Wolk’s pleasing, dexterous prose, while the book’s more playful interludes are touched by a measure of gravity or sadness. Partly, this fusion results from Wolk’s keenly invented place, and the hold that environment exerts on the people who live there.” –Newsday

Those Who Favor Fire "is a wonderfully quirky love story with a brisk, good-humored style that suggests no matter what happens in the short run, in the long run things will turn out all right....Through it all, Wolk has a fine knack for the development of character, the creation of a very real sense of place, the labyrinthine trust and betrayals of relationships. This is a fine first novel, beautifully and engagingly written, filled with surprise twists and a love of the human heart that recognizes both death and possibility. It honestly delights and keeps those dark, empty spaces clear in its vision, while in pursuit of the elusive substance of life itself."
–The Providence Journal

“First-time novelist Wolk has conceived an engrossing plot and peopled it with appealing characters. In this cautionary tale, folk elements and environmental caveats combine with a subtle yet unrelenting sense of horror to produce a fiction reminiscent of the best of Shirley Jackson.” –Publisher’s Weekly

“Wolk has made a ravishing love story in this lyrical novel. Her descriptions of the minutiae of daily living…are beautiful without being precious; her shaping of the relationships…are true and sensuous. The tale is…a magical evocation of what can be done well with a lot of money or with no money at all. The fires scenes are horrific, the eroticism etched in honey and heat, all of the language supple and creamy. A fine read.” –Booklist, starred review

Named by the Pittsburgh Post-Gazette one of the top ten novels of 1999: "A rural town slowly dying is not fiction, as Pennsylvanians know, but the image becomes an effective metaphor for Lauren Wolk, whose first novel, Those Who Favor Fire, is a moving story of second chances."

Named "Best Fiction of the Year" by the Providence Journal: "Fiction? Tons of goodies. But I think I'll pounce upon Lauren Wolk's first novel, Those Who Favor Fire (Random House), as a real winner."

“…Those Who Favor Fire is a convincing love story and a poignant evocation of the meaning of home.” –Boston Magazine

“The strength of Those Who Favor Fire lies in the author’s evocative, skillful use of detail about this fictional town and its people.” –The San Diego Union-Tribune